The IQAC of Maharani Lakshmi Ammanni College was formed on 26th February 2005 with the objective of creating quality consciousness in the institution and providing an environment for its sustenance.

“The institution is committed to meeting the needs of all its stakeholders by providing support and facilities of the highest standards in the teaching-learning process. The institution intends to provide quality education and training through the continuous improvement of its standards and performance”.

The IQAC of Maharani Lakshmi Ammanni College was established in February 26, 2005 with the objective of creating quality consciousness among all stakeholders of the institution. The IQAC has since been focussing upon quality improvement and sustenance in all domains of the institutional functioning.

The IQAC has been consistently taking initiatives towards faculty development and student development. Feedback and inputs from students, alumni, parents, industry and community is taken to ensure that the institution is equipped to adapt to changing times. Teacher orientation for new recruiters is an important activity undertaken by IQAC. Most importantly teachers are provided opportunities for development through PRAGATI (Programme for Reinforcement, Acceleration, Growth and Advancement through Training and Internalization) which is organized as in-house or outbound faculty training programme. The SATVA (Student and Teacher Value Assimilation) programme is focused upon sustained development of all aspects of the institution through value education for students and teachers. Student feedback forms an important aspect for quality sustenance and improvement in teaching learning and research. Optimum utilization of all resources, particularly finance, infrastructure and human resource is focused upon to ensure continuous improvement of the institution’s standards and performance.

Report of various activities conducted during 2010-2016

Women Development Centre at mLAC is working towards empowerment of young women in various forte. The centre has conducted and organized various programs focusing on building entrepreneurship skills.

WDC is constantly working in many areas for the benefit of the students in focus and has provided a platform for them to exhibit their organizational skills through the programs which they arrange under the able guidance of the faculty members. 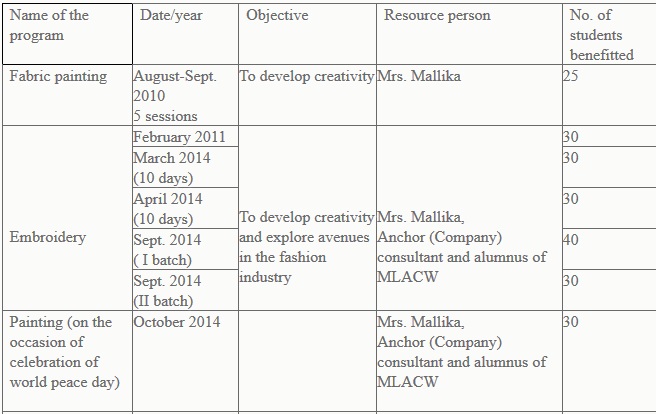 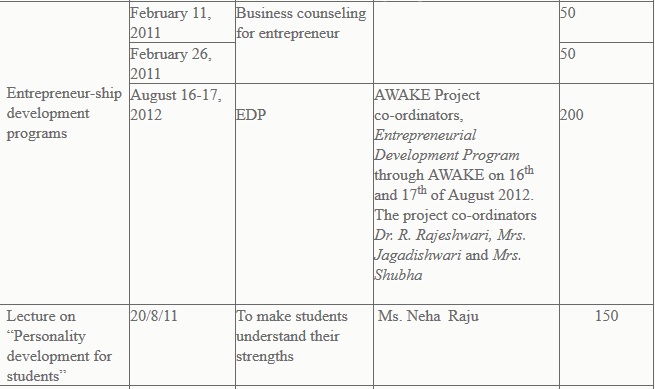 Streetplay training on the theme of “solidwaste management” , “ Atrocities on Women - Gulabi Gang”,

Mr.Anand trained a batch of 20 students. After giving first performance near thecollege (18th cross) which received great appreciation andrecognition from the public, the team performed at various venues on differentoccasions in Bangalore.

Inspired by the training andappreciation by the public during street play these students preparedthemselves for the theme on ““Be good,do good and be victorious” for an intercollegiatestreet play fest organized by Bishop Cotton Women College and have won I prize.

This play had script, direction , costumes, instruments which were conceptualized bythe students themselves. (8 students)

Street playperformance by the students during 2014-15: 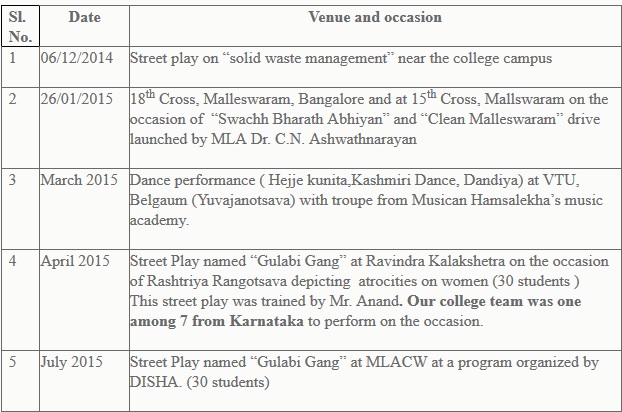 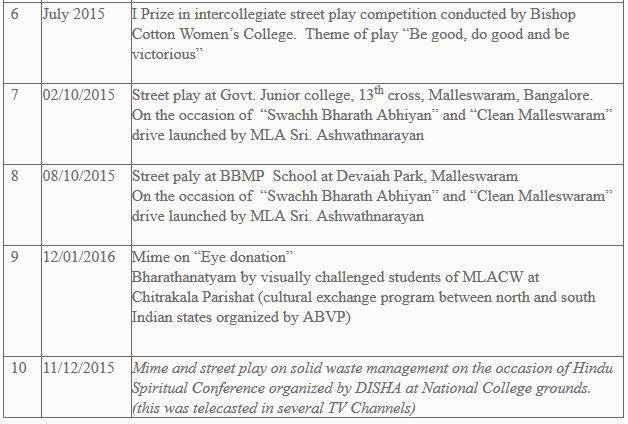